“We are never so vulnerable as when we love, and never so hopelessly unhappy as when we lose the object of our love.” ~ Sigmund Freud 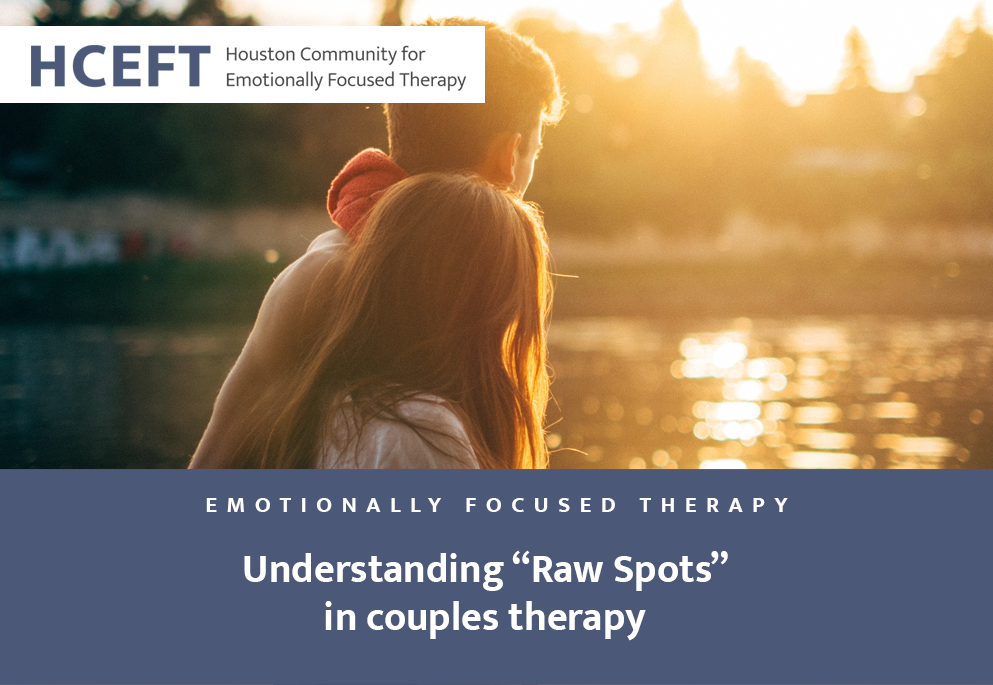 Haley met Eric on a sunny day while they were sitting outside enjoying Sunday brunch. Everything about him got her attention: his looks, his choice of clothing, his Bloody Mary, but mostly the kindness in his eyes. When he approached her table, she felt her heart race.

But Haley wasn’t sure if she was excited, apprehensive or both. She was still healing from a painful break-up. She didn’t understand what went wrong in the old relationship, and the not knowing scared her. Whenever she felt attracted to someone, she wondered, would he break her heart, too?

The simple truth — we are vulnerable with those we love.

It is the one relationship where we show up with our strengths and our weaknesses, too. Dr. Sue Johnson talks about “raw spots” in her book, “Hold Me Tight: Seven Conversations for a Lifetime of Love.”

Sue defines them this way: “A hypersensitivity formed by moments in a person’s past or current relationships when an attachment need has been repeatedly neglected, ignored, or dismissed.”

Attachment needs are our human desires for acceptance, belonging, comfort when we hurt, and safety to be ourselves. From the cradle to the grave we all long to feel understood and accepted by those we love.That is why most fights and conversations couples have in my office are not about money, in-laws, remote controls, or divisions of labor. Most couples fights are about attachment needs, and the threat we feel when they are not met.

Haley and Eric had an intense courtship and a beautiful wedding. But they never discussed their raw spots. Haley was still afraid of getting her heart broken, and not just because of the previous relationship that had soured inexplicably. Her father had left home when she was only 7. Both she and her mother had been deeply hurt.

Eric had his raw spots, too. Inevitably, he and Haley fought. And when Haley criticized him, he felt he could hear his mother’s nagging voice. She hated his interest in video games and texting, just as Haley criticized him when he focused on his phone messages instead of her.

The love and attraction Haley and Eric felt for one another was unmistakable, yet their fights were intense, too. He felt she was disproportionately angry; she should cut him some slack. She felt desperate and confused. Was this relationship going to go down the tubes, too?

During the sessions in my office, we unpacked all those hurt feelings. Haley and Eric came to understand that the fights were more about their own raw spots than problems with each other. As they healed their wounds and their relationship, the fighting decreased drastically.

As couples therapists, what can we learn from Eric and Haley?

All your couples clients have raw spots.

To help your couples clients stop destructive fights, it’s important for couples to identify their raw spots, understand them, and focus on healing.

To help clients understand where their own raw spot developed, you can ask them to think about times in the past they had similar emotions or times in the past when their attachment needs were not met. Memories may be of times when parents or past partners couldn’t meet their needs, and that is where the healing can begin.

You can help identify your clients their raw spots when you notice:

For instance, Haley was able to tell Eric that it helped when he let her know that he expected a busy day at the office or that he was preoccupied with a problem at work. Then Haley understood that his preoccupation wasn’t personal; he wasn’t distancing himself from her.

Haley also told Eric that she found his touch and hugs very comforting, and he was happy to hear that. He learned he could comfort the woman he loved and feel better about himself as a husband.

Eric told Haley he needed to know he was a good partner and appreciated affirmation from her when he was thoughtful and caring. He also asked Haley to tell him when she was upset and not remain silent and fuming. He also asked her not to withhold sex because that was an important way that he felt comforted and loved.

Raw spots are easier to address if clients have grown up in a safe, secure home where expressions of emotions and needs were respected and acknowledged. However, in the case of past emotional trauma and possible neglect and/or abuse, the challenge is bigger and requires more patience and perseverance in therapy.

Doing this work with your clients can help them achieve what they want, a close and loving relationship.

If you are interested in learning more and improving your couples therapy practice, check out the upcoming Emotionally Focused Therapy Externship in Houston.

Liliane Nahas is a certified EFT supervisor and therapist. Her practice in Houston is devoted to couples, individuals and EFT supervision. She provides supervision to EFT therapist both in person or distance via a phone or meeting rooms. She regularly provides introductory workshops in EFT for therapists and assisting at EFT trainings for therapists.

We are proud to be affiliated with the International Center for Excellence in Emotionally Focused Therapy (ICEEFT), founded by Dr. Sue Johnson in 1998.

If you register on or before December 8, 2017, 30 days your registration will be final. After you have been registered for 30 days, you will not receive a refund.

On or after January 8, 2018, all registrations will be final there will be absolutely no refunds.

In the event a seminar is cancelled HCEFT is only responsible for reimbursement of fees paid for the training. All costs incurred for travel arrangements are the sole responsibility of the individual or entity that made those arrangements. HCEFT reserves right to move venue location and assigned presenters originally advertised for an event with a 30 day notice to attendees. In the event a venue or presenter is changed, no reimbursements will be given. Venue changes are not to exceed 50 miles or 1 hour drive time from the original venue advertised. The individual or entity that made the arrangements to attend a HCEFT event agrees to hold harmless HCEFT, and its director, from any and all liability associated with those travel arrangements. By registering for any HCEFT sponsored or hosted event the individual or entity agrees to these terms.

Enter your name, email and location to receive updates that are relevant to you. If you are in the Houston area, you will receive information about upcoming community meetings.